India: The democratic giant goes to the polls

Home/Uncategorised/India: The democratic giant goes to the polls
Previous Next

India: The democratic giant goes to the polls

The greatest exercise in global democracy has just started. It is the Indian general election, as 900 million people have the opportunity to decide the next steps for the fastest growing major economy in the world.

Here we look at the journey since 2008, the current state of the Indian politics, economy, and markets, and consider the opportunities for the years ahead.

As we headed towards Christmas in 2008, I managed to speak to Avinash Vazirani, manager of the Jupiter India fund. In the days before he had arrived back from a visit to India, and I asked him how bad things were there. After all, at that moment in 2008 the situation in the UK and global economy and markets was chaotic, fear abounded, and even the most experienced and typically balanced economists and fund managers were very shaken.

Yet Avinash told me that from the moment he got off the plane in India it was as if nothing had happened. He saw smiling faces everywhere, confident people going about their days. He was no rosy eyed tourist. This was the most experienced manager of Indian equities based in the UK. I got the sense that even he was surprised at what he observed.

Sure enough, the last 10 years have been rather good for India. In particular in 2014 the landslide election of the BJP party, led by Narendra Modi, gave new enthusiasm and momentum to progress in India, both in the broader economy and in the stock market in particular.

Now there is another election just starting.

What has happened over the last 10 years? What are the prospects for Prime Minister Modi? And what is the outlook for the next 10 years and beyond?

We have given a lot of coverage elsewhere to the sharp falls in the US stock market and beyond from late September 2018. What has been given very little coverage is the fact that while the rest of the world went into a bit of tailspin, confidence in India didn’t just hold steady, as in 2008, but was growing if the Indian stock market is a decent guide.

Interestingly, at the beginning of 2019 I noticed a fair amount of coverage of the Indian stock market and economy which still varied between negative and nervous. One journalist was quite terrified at one possible outcome in the upcoming election. If you had predicted some caution in the Indian stock markets from early 2019, that would have been judged an eminently sensible conclusion. But there was none of it.

Having already sidestepped the global market downturn from September 2018, this year the Indian stock market continued to rise, and in recent days has hit new highs (see chart 1). In particular this has been driven by domestic Indian investors.

Back in January one article spoke of an election outcome the prospect of which was “terrifying” for India.

The lower house of the Indian Parliament’s, Lok Sabha, has 543 seats. The grave concern of the writer was that unless both the BJP and Congress had together in excess of 300 seats, too many fringe or extreme parties would have too much power. In the words of the writer, this would lead to an inherently unstable government and permanent squabbling, and the good work of recent years would quickly unravel.

This outcome has two requirements.

Firstly, a significant proportion of the Indian voters, who previously enthusiastically endorsed Narendra Modi, would have to have lost confidence in him and his administration to such an extent that they would vote for alternatives.

Secondly, they would also have to lack sufficient confidence in the natural opposition, the Congress party. It is these two elements combined which would open the door widely for the alternative smaller and fringe parties, and that “terrifying” outcome.

Has confidence broken down?

This possibility was mooted earlier this year because enthusiasm for Modi had certainly waned, as evidenced by unexpected victories by the opposition in State elections in December 2018, and in Modi’s backyard to boot. What had gone wrong?

Many good things happened from 2014. For example, in the areas of tax reform, bankruptcy reform, regulation of property and considerable investments into infrastructure.

In addition, headline inflation decreased from 11% in 2014, down to around 2% today. This provided much-needed stability during a period of fundamental reform.

The twin problems were the rural economy and jobs.

Two thirds of Indian electors are rural, and India remains an agricultural society. It is the rural society and farmers in particular who feel that, although India has advanced, farmers have been left behind. This has been made worse by the lack of job opportunities for young people who are trying to escape farming.

The promise of change in 2014 led to raised expectations at the time, but by 2018 this turned to fundamental disappointment amongst many voters.

In recent months there have been the very predictable what some would call bribes by the Modi government for farmers. But it remains to be seen whether this is too little too late to ensure BJP dominates the next government.

Rural voters might have their doubts, but the business community is with Modi.

Confidence in the economy and stock market is reflected in business sentiment which has continued to improve over the last seven months, while similar indicators throughout much of the rest of the world have been falling or stagnated.

Growth has also continued for the 20th month in a row, despite a slowing global economy. It is no coincidence that some of the strongest support for Mr Modi has come from the Indian business community.

India is the fastest growing country in the world.

It will have the biggest population in the world by 2025 (some believe it is the biggest already).
You cannot ignore it.

For example, at the moment the Indian economy is worth $2.8 trillion, and it is projected that by 2050 it will be worth a huge $28 trillion (according to Indian industrialist Gaurav Dalmia).

Progress on this scale will have profound implications not just for India but also for the world.

India will have to create 1 million new jobs every month just to keep up with the demographic shifts, and this in turn will almost certainly require many more workers moving away from the dominant agricultural sector. This will not be easy.

One prerequisite will be vastly better institutions, less regulation and bureaucracy, and continuing efforts to clamp down on corruption. Such changes can only happen over many years, certainly in a democracy. Everyone, including investors, must both be patient and expect many bumps in the road.

Although I started this blog by stating that India is the fastest growing major economy in the world, with recent growth at about 7% a year, some regard this as rather tepid, and barely sufficient to drive the advances which are required, in particular to bring farmers out of poverty and create many more jobs for young people. When India is doing really well, we should expect growth rates to be nearer 9% or possibly 10%.

When Napoleon was criticised for winning battles simply because of good luck, he famously replied “I would rather have lucky generals than good ones”.

Some Indian voters may feel that they would rather have a lucky Prime Minister than a smart one.

Inflation has plummeted in India due to a sharply lower oil price and bumper crops. For example, in 2014 the price of a barrel of oil was $108, but in the following six months prices halved. This is very significant for a country which imports 80% of its fuel.

This string of good luck continued in recent months for Modi. The missile strike against the suspected terror camp in Pakistan certainly served to shift the debate ahead of the election, at least to some extent, away from the issue of farming and jobs, conveniently moving national security centre stage.

“India’s economy has been driven almost entirely by luck…when oil prices came down, the economy looked great. When oil prices started to go back up, it took its toll.”

While that has a ring of truth, perhaps the Indian electorate would prefer a lucky leader than someone who might be smart, but is also untested.

The exposure of global fund managers to India is surprisingly limited, in fact last year the ownership of Indian equities across emerging market funds was at its lowest since 2012. If we go back to India in 2012 it was a very different animal, “an economy blighted by serious external vulnerabilities stagflation and a weak government without policy direction”.

Domestic Indian investors are more enthusiastic. The rise in their stock market over the last six months is undoubtedly a vote of confidence in Modi, at least by the investing classes, and despite the electoral losses in December.

In addition, old favourites of Indian investors and savers such as property and gold have underperformed in recent times. This has resulted in a tremendous shift in the type of saving, to financial assets, and consistent inflows into stock market over the last 2 to 3 years.

To put some stabilisers on your immediate enthusiasm, it is worth remembering what Dr Raghu Rajan (former Indian central bank governor) once said:

“If you are an outsider looking at India, learn to filter out both the irrational exuberance and the excessive pessimism. We are subject to both.”

How to buy India

The story of India, built around a young population, is a compelling one. But advances also require a commitment to reform, which is on the one hand going to be slow, and on the other hand will undoubtedly have some miss-steps.

For those who wish to build a long-term exposure, but are slightly wary of the risks over shorter periods, consider dripping in. One of the beauties of this automated strategy of regular investing is that, until prices explode upwards, little judgement is required. The longer the market into which you invest goes sideways and down, the more you buy at cheaper prices, increasing your profit potential later.

There are limited fund choices. We have favoured Jupiter India for a decade. It had a tough 2018, but is now outperforming its peers in recent months. In chart 2, you can see the performance of the Jupiter India fund vs. the S&P 500 and FTSE 100 since the S&P’s peak in October 2018.

Voting began on 11th April and finishes five weeks later on 19th May. As mentioned earlier, there are 543 seats in the lower house of the Indian Parliament, which means that you have to have 272 MPs to form a majority government, whether from one party or coalition of parties.

There are an extraordinary 930,000 polling stations, with electronic voting machines at each one. There are 900 million voters, which is 86 million more than in 2014, when Modi enjoyed his landslide victory.

It will be a fascinating couple of months for this huge country. 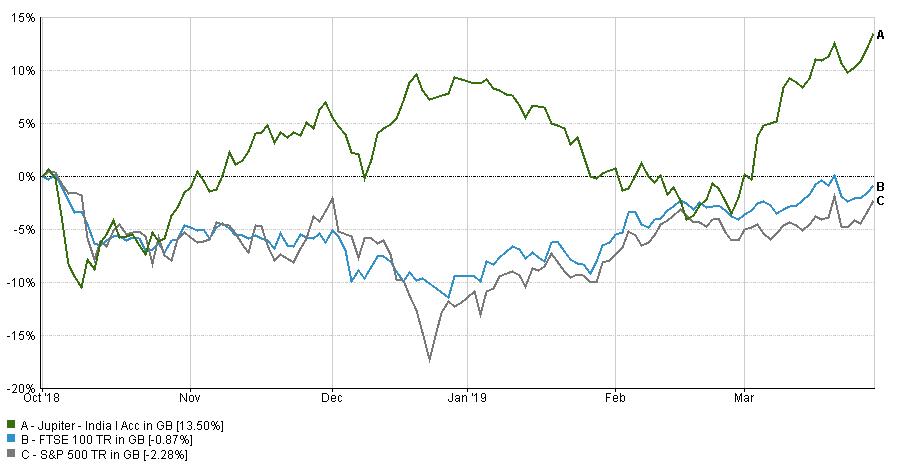